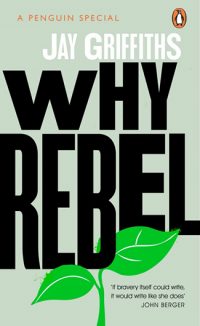 'Jay Griffiths's courage and energy are formidable, but so is her sheer intelligence and literary flair.'

Because our footprint on the Earth has never mattered more than now. How we treat it, in the spirit of gift or of theft, has never been more important.

Because we need a politics of kindness, but the very opposite is on the rise. Libertarian fascism, with its triumphal brutalism, its racism and misogyny – a politics that loathes the living world.

Because nature is not a hobby. It is the life on which we depend, as Indigenous societies have never forgotten.

Only when it is dark enough can you see the stars, and they are lining up now to write rebellion across the skies.

From the author of Wild, this passionate, poetic manifesto for urgent rebellion is also a paean to the deep and extraordinary beauty of the real, the true, the living world.

I wish that everyone who said they believed in angels would actually believe in insects. Thanks to the insects, we have food, but it is also insects who, tactfully and quietly, remove the dead. Without them, we would be wading through corpses at every step.

We need the living world, that truest of worlds, both in death and in life: thanks to other animals, human life is vitalized. Animals, their senses alert to every scent and whisper through their paws, antennae, wing- tips and noses, are our guides and our healers.

Mindedness surrounds us: in air and water, on land and in the soil under our feet where the lovely, holy worm, in sweet complicity with the dreaming Earth, quickens death itself to life. In the transforming dark, trees are messaging each other through their roots and, where tree roots link with fungi, the network of underground awareness is able to respond differently to the presence of different creatures. Awareness surrounds us. Tingling.

Perhaps nowhere is so full of life as the forest of the Amazon: bursting, writhing, tickling and rotting. Death itself is merely matter requickened into something else because everything is a part of the shapeshifting metamorphosis at the green core of life. In the Amazon I felt, as never before, that I had touched the quick of the thing, had put my finger to the pulse at the heart of the world, in an experience of empathy with that wildest of creatures, the jaguar. Indigenous societies in the Amazon have never forgotten the mindedness of life, honouring it with a way of thinking that is empathetic, willing to cross borders, linking with other species, a way of walking immersed in the true world, sensitive to its ethic.

How we walk the Earth has never mattered more than now. How we treat it, in the spirit of gift or theft, a bill or a prayer, has never been more important, not only for the intrinsic value of the living world, but for humanity’s health and well- being. In a startling demonstration, the Coronavirus that has so traumatized the world was unleashed by our destruction of forest habitat and the slaughter of wild creatures.

Where were you when the music stopped? Everything ceased. Schools closed. Churches were shut. The pubs were silent. Friends could not meet. We cancelled everything to fight the virus: weddings, work, exams, football and theatre. We stopped doing everything except the very thing that had caused the virus in the first place: annihilating the living world.

Forests have been destroyed for cattle to feed the insatiable appetite for beef: wildlife is slaughtered for tamelife as soya is grown on previously forested land to feed the chicken industry. Bereft of their seclusion in the forests, wild creatures were forced into contact and the virus jumped to humans. Astonishingly, the cause was quietly noted, and yet nothing was done.

Although humans are just 0.01 per cent of all life, we have destroyed 83 per cent of wild mammals, and we have done so without awareness. Now, aghast, we begin to see and to name.

The saddest word I know in any language is the word endling. It refers to the last individual of a species, final and forlorn, at whose death the species is extinct. An endling is the very epitome of tragedy, and the word was coined, appropriately, in this age of extinction, this strange age of our dawning knowing, seeing the unhallowed horror that is approaching.

The human conscience needs to be corroborate with the natural world and aligned to its ethic, furthering a politics of kindness. But a political stance that is the opposite of kindness is on the rise: libertarian fascism with its triumphal brutalism, its racism and misogyny, the politics that loathes the living world. Tonally fascistic in many countries, it is openly so in some countries and, in the case of Brazil, where it launches its assault on the Amazon and the peoples of the Earth who live within those forests, it is a chiaroscuro of cruelty.

Here, then, the causes for rebellion: survival and awe; beauty and necessity; grace and grief. There is an uprising of life in rebellion for life, those who are griefstruck and furious for the tawny ones, the creatures of feather and fur, demanding that media and governments tell the truth about the emergency we are in, fighting for life in this shared, wild home.

I have felt the grief, once diving in a coral reef at its dying moment, as it glows a luminous ringing blue, ultramarine, ultra-dying at an ultra-twilight. And I have been imprisoned in the cells for my activism for climate and against extinction. I write about my arrest and trial, and the judge’s response. (In tears. ‘Thank you. You have to succeed.’)

Only when it is dark enough can you see the stars, and they are lining up now to write rebellion across the skies. Why rebel? Because nature is not a hobby. It is the life on which we depend.

“Jay Griffiths is such a unique talent and is, in my opinion, one of our greatest and most important writers of this and any other time. She is part of that lineage which includes William Blake and Walt Whitman and I get that same feeling when I read her words and theirs: I feel so alive, so vital, a kind of bursting at the seams with joy and love. Why Rebel is not only important at this time but also magnificent, in the true meaning of that word. It contains not just important truths and beautiful words: the book communicates to the reader, through exquisite and deep prose, a sense of that profound and mysterious relationship with Earth, our home and all life upon it. It is truly extraordinary.”

“A bold and innovative writer who’s always exploring new frontiers of thought and feeling and new ways of writing about them. A great stylist, lively and curious, she writes beautifully, about a very wide range of topics. But in every case, she brings something to them that nobody else could bring. And that is Jay Griffiths. She has her feet on the land, and her eyes on the stars.”

“Jay Griffiths’s writing has reduced me to hot throbs of grief; through beauty and subtlety, to the depths of the hurt of these times..and what a liberation to express this, to free the space in my chest to feel the love that propels me forwards.”

“It is hard to imagine a more necessary book – nor one more beautiful, more rich and passionate”

“Right. Put down what you’re doing. Whatever it is, this matters more. Read it fast. Then read it again, slowly. You’ll want to: this is the real thing – surging, urgent, and most terribly beautiful. It will be a searing and painful joy. You’ll be different by the end. Then change the world while you can.”

Charles Foster, author of Being a Beast

“When surrounded by death and destruction the most human thing to do is to engage in an act of kindness. Why Rebel is such an act. It made me cry ”

“Always a writer of such dazzle and depth, Jay Griffiths has surpassed herself with Why Rebel.  There is of course the passionate erudition and deep humanity that we have come to expect of her, but there is so much more too.  She writes with a new urgency, from this very point in time, as a pandemic wreaks societal havoc, climate breakdown accelerates and thuggish populism rises.  Her focus is laser-like, unblinking, calling out culprits and charlatans, and fighting fascists with the things they fear the most: clarity, truth, wit.  She dances between topics and weaves them together, thrillingly, making a delightful read, an adrenaline-packed ride with far-reaching views.  Why Rebel demands the very highest response from its readers.  Jay Griffiths has given us a clarion call for revolution.  Nothing less will do.”

Mike Parker author of On the Red Hill

“Chewy, erudite, filled with swing: this is a dazzling book, urgent without ever being worthy, a book that crackles. Why Rebel is a Tardis, to read it is to enter the massive, a deep interior that hydrates vocation in a time of trouble.”

“This short book is beautifully written, and packs a powerful emotional punch. I found myself welling up as I reached the end. At this desperate moment in human history, Why Rebel is surely part of the wake-up call we need.”

“Why Rebel is a kind and urgent book. This is a planet still full of tingling life, it just needs these true words spoken to transform it.” 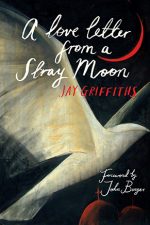